Just like the rest of the world, the XXII Winter Olympics has captured my attention ever since Team USA walked out in those hideous sweaters Friday night. For 16 days the world will sit in front of the TV, eat King Cake, and watch every move, detail, and technique performed by these athletes. Six days in and I feel like a complete failure at life because I’m not an Olympian. I complained throughout the mere three weeks of training I put into the Rock-N-Roll half marathon, so how these athletes dedicate years of their lives to training is mind blowing. In addition to the support of family, friends, and coaches that help inspire and guide these athletes to Sochi, the growth of technology has also played a big part in reaching the gold.

Here are five ways technology has changed the Olympics.

1) Slim, Trim, and Faster Than the Speed of Light – Custom-Fit Track Suits Shave Off Seconds Far from the flowing tanks and short shorts our parents remember on seeing Bruce Jenner, Nike’s custom-fit track suit has allowed for a faster, sleeker champion. Besides the fact that it may or may not take an hour for someone to squeeze themselves into this skin tight suit, athletes are able to move faster than ever. With the help of Nike, in 2008, Team Jamaica’s Usain Bolt broke the 100 meter record with a 9.63 second run, earning the title Fastest Man on Earth.

In 2012, Summer Olympic sponsor BMW launched a dual-lens camera with 3-D imaging to measure track and field long jumpers in motion. This piece of technology immediately measures velocity and calculates the athlete’s body motion and positions. In years past, analyzing movement at this level would rely heavily on the coach’s eye and basic video. Now, this data is immediately available for review and improvement to technique. 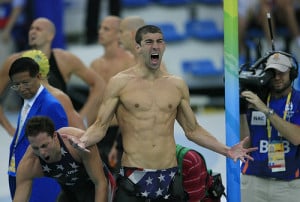 In 2008, Speedo introduced us to the very toned quads of Michael Phelps as he and the rest of Team USA sported the full-body swimsuit. The compression of this bodysuit is made to improve swiftness and reduce drag in the pool. I think it’s pretty obvious that this suit helped Phelps become the most decorated Olympian of all time – leaving Mark Spitz in the bubbles.

From athletes posting pictures of the atrocious living conditions in the Sochi Olympic Village, to news sources leaking pictures and interviews of athletes biting the gold, social media has taken over the Olympics. In postings, pictures, and tweets going viral, athletes invite viewers into their lives from training days in the US to the slopes in Sochi.

…With no phone to call for help, I used my bobsled push training to break out. #SochiJailBreak pic.twitter.com/apZRefgvCO

At the 2012 London Summer Olympics, McKayla Maroney’s look of disappointment as she received her silver medal went viral! From generating memes to photoshopping her into pictures, “McKayla is not impressed” blew up on social media. At this year’s Winter Olympics, it was bound to happen again when Ashley Wagner’s similar face of disappointment lit up the screen after receiving her fourth place score in a team figure skating program.

Social media has allowed viewers back home in the States to stay updated with team members and make a personal connection with athletes. Not only does this help with support, it invites us to feel closer to Team USA than we’ve ever felt before.

Got a favorite social media update about the Olympics? Post in the comments!

One Response to “5 Ways Technology Has Changed the Olympic Games”