Champions in the Field: SI Finishes Strong at its Spring Team-Building Event

This quarter’s team-building event was planned by the Partner Accounts Department, and they did not disappoint. Taking it back to our school days, Influencers were divided into teams and competed against each other in various events. Field Day was held at the beautiful City Park on Friday, March 20. There were a total of seven events that the teams had to participate in.

To start off the relay, the first event was the shoe switch race. People participating in this event had to take their shoes off and put them in a pile with the other teams’ shoes. At the start of the race, participants had to run to the pile, put on and tie their shoes, and then run back to the start to tag the next person.

The next event was the three-legged race. Influencers partnered up, were tied together at the knee, and raced to the finish line to then tag the next person to move on to the next event. The third, and “coolest” (pun intended) event was the water balloon toss. No one could move on from this event before completing five tosses of water balloons with their partner, getting farther and farther away from each other.

Afterward, the teams could move on to the spoon balance. Eggs were put on a spoon, placed in the team member’s mouth, and balanced as they walked to the finish line of this event. If your egg fell, you had to start over! Next was trivia. Team captains asked their team members questions about the company, SEO, and even Will Scott himself! Once the team answered 15 questions correctly, they could move on to the final event!

This event was for every member of the team. After lining up, they had to pass a beach ball over and under each person. The team that finished first won the Search Influence Field Day! After a long and hard fight, the gold team took the win. Search Influence Field Day, of course, ended with great food, drinks, and team-building fun. 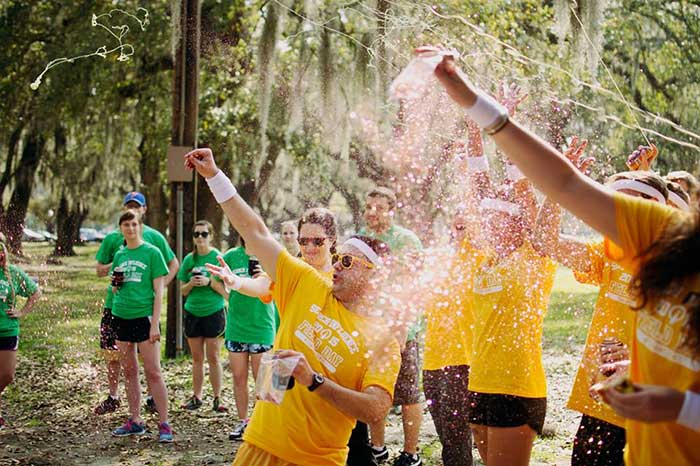